Godzilla: Gangsters & Goliaths is a comic book mini-series by IDW Publishing, written by John Layman and illustrated by Alberto Ponticelli. It ran for five issues from June 15 to October 19, 2011.

The series has received positive reviews from comic book critics and fans alike. Toho Kingdom called it "one of the more thought out and clever interpretations of the Godzilla universe," and reviewer Destroyer14 from ComicBookMovie described it as "surprisingly excellent." 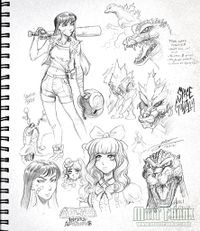 This is a list of references for Godzilla: Gangsters and Goliaths. These citations are used to identify the reliable sources on which this article is based. These references appear inside articles in the form of superscript numbers, which look like this: [1]

39 months ago
Score 0
That title.. LOL
Permalink
↑ back to top ・ contents
Retrieved from "http://wikizilla.org/w/index.php?title=Godzilla:_Gangsters_and_Goliaths&oldid=172631"
Categories: