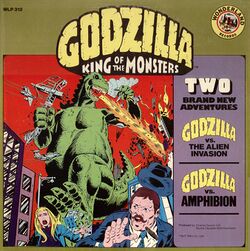 Godzilla: King of the Monsters was an LP released by Wonderland Records in 1977. It contained two recorded stories, "Godzilla vs. the Alien Invasion" and "Godzilla vs. Amphibion."

The LP was re-released as a CD in 1998 by Golden Drive Records with the addition of two remix tracks, both titled "Godzilla vs. Gomi."

Godzilla vs. the Alien Invasion


↑ back to top ・ contents
Retrieved from "http://wikizilla.org/w/index.php?title=Godzilla:_King_of_the_Monsters_(Wonderland_Records)&oldid=154710"
Categories: