King Ghidorah (キングギドラ,   Kingu Gidora) is a three-headed dragon kaiju that appeared in the 1998 film, Rebirth of Mothra III.

The "Ghidorah" (ギドラ,   Gidora) part of King Ghidorah's name comes from the Japanese word for "hydra" (ヒドラ,   Hidora), which shares two of its three katakana characters with "Ghidorah." It also, coincidentally or not, sounds very similar to the Russian pronunciation of "hydra" (Гидра, ˈɡʲidrə). The addition of "King" (キング) to his name may have been influenced by King Dragon (キング・ドラゴン,   Kingu Doragon), the name given to Zmey Gorynych, upon which King Ghidorah's design was based, in the Japanese version of the Soviet film Ilya Muromets.

Initially during development of Rebirth of Mothra III, the filmmakers considered featuring a new monster as Mothra Leo's foe, as they had done for the first two entries of the trilogy. This new monster was to be associated with fire, and Leo would travel back to Edo period Japan to fight it.[3] Eventually, Toho decided to incorporate a more well-known established monster into the film. Initially, their choice was Rodan, before King Ghidorah was ultimately settled upon.[4] King Ghidorah's last film appearance had come in 1991's Godzilla vs. King Ghidorah, though the character had been considered for multiple unrealized projects since then. Toho had planned a direct sequel titled The Return of King Ghidorah, which would feature an extraterrestrial King Ghidorah separate from the one in the prior film arriving on Earth to challenge Godzilla. When this project ultimately resulted in Godzilla vs. Mothra, Toho revived the concept for the sixth film in the Heisei series. In this story, Godzilla was to battle an alien King Ghidorah dubbed "Emperor Ghidorah," but this idea was also scrapped and replaced with SpaceGodzilla. Koichi Kawakita said in a 1995 interview that Toho planned to produce a standalone film starring King Ghidorah in 1999,[5] but this never came to pass, possibly because of the character's appearance in Rebirth of Mothra III. For his role in Rebirth of Mothra III, King Ghidorah would be returned to his traditional depiction as an evil space monster, a characterization Toho had planned to return for the various unmade films featuring him in the Heisei series. 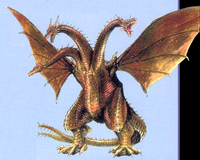 This incarnation of King Ghidorah returns to the Showa incarnation's depiction as a malevolent space monster that arrives on Earth to decimate all life. The explanation for this King Ghidorah's destructive nature is that he feeds on the life forces of the creatures he kills. King Ghidorah caused the Cretaceous extinction millions of years ago, and returns to Earth in the present day to feed on the life forces of children. This King Ghidorah appears to be more intelligent and methodical than past incarnations, constructing a huge dome in which to trap his victims and slowly harvest their life forces. He is also capable of instilling mind control on other beings, and does this to turn the Elias against each other.

King Ghidorah is an evil giant three-headed dragon from outer space and a more powerful relative of Desghidorah. He first arrived on the Earth millions of years ago as Cretaceous King Ghidorah. King Ghidorah wiped out the majority of life on Earth and consumed their life forces. He then returned to Earth in the modern day in his more powerful mature form, intending to feed on the life forces of human children. 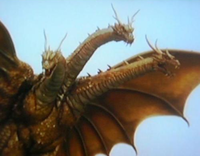 The King Ghidorah from Rebirth of Mothra III demonstrates many unique abilities not shared by any incarnations before or since, in addition to the character's traditional abilities.

King Ghidorah can fly at a speed of Mach 3 while in the Earth's atmosphere and at sublight speeds while in outer space.[2] King Ghidorah is able to fly even with the loss of one of his wings using a zero gravity field. Also, in a scene with a lying meteorite, in which King Ghidorah was enclosed, the surrounding trees and the earth took off into the air, which confirms the presence of manipulation of gravity.

Modern Type King Ghidorah can fire the character's traditional golden Gravity Beams (引力光線,   Inryoku Kōsen) from his mouths.[2] These beams are powerful enough to destroy buildings and severely injure Rainbow Mothra. He can also combine his Gravity Beams into a single concentrated blast, called the Gravity Beam Triple Tornado (引力光線トリプルトルネード,   Inryoku Kōsen Toripuru Torunēdo),[2] which was sufficient to send Rainbow Mothra flying through the air but failed to even slow down Armor Mothra. Before unleashing this combined attack against Armor Mothra, his entire body emitted a golden glow.

King Ghidorah can fire up to six Antigravity Beams (反重力光線,   Hanjūryoku Kōsen)[2] from each of his wings.

King Ghidorah can instill a weak mind control on other beings susceptible to it using a Hypnosis Beam (催眠光線,   Saimin Kōsen) projected from his eyes.[2]

Modern Type King Ghidorah cannot be harmed at all by any of Mothra Leo's various attacks, at least until the latter transforms into Armor Mothra.

King Ghidorah is shown to have regenerated his entire body from a severed tail that was cut off by Rainbow Mothra in the past. The book Rebirth of Mothra III Super Complete Works suggests that King Ghidorah could still regenerate from the wing Armor Mothra slices off in their final battle.[2] 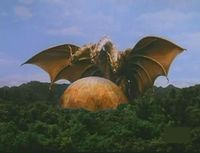 King Ghidorah and his dome in Rebirth of Mothra III

King Ghidorah is able to create a dome (ドーム,   Dōmu)[2] that allows objects to pass through, yet has a corrosive effect when they try to leave. The dome's exterior is laced with tentacles that pull outside victims inside. Living creatures inside the dome slowly have their life-force drained and transferred to King Ghidorah.

King Ghidorah can teleport smaller beings inside his dome.

This is a list of references for King Ghidorah/Rebirth of Mothra III. These citations are used to identify the reliable sources on which this article is based. These references appear inside articles in the form of superscript numbers, which look like this: [1]

Showing 23 comments. When commenting, please remain respectful of other users, stay on topic, and avoid role-playing and excessive punctuation. Comments which violate these guidelines may be removed by administrators.

↑ back to top ・ contents
Retrieved from "http://wikizilla.org/w/index.php?title=King_Ghidorah/Rebirth_of_Mothra_III&oldid=151491"
Categories: