Sanda (サンダ,   Sanda) is a Frankenstein-spawn Template:Kaiju created by Toho that first appeared in the 1966 Toho film, War of the Gargantuas.

Sanda's name is derived from the Japanese word for 'mountain', (サン,   San), reflected by the fact that he has spent his life living in the mountains. It could also be derived from the Japanese word for 'three', which is also san. This may relate to his status as the third 'Frankenstein monster' to make an appearance, after Frankenstein himself and Gaira.

In War of the Gargantuas, Sanda is gentle and caring, due to being lovingly raised by human scientists, including Akemi Togawa, when he was an infant. After learning that his "brother," Gaira, is under attack by the J.S.D.F., Sanda rescues him, but does so non-violently, refusing to fight back against the military. Sanda tries to keep Gaira safe and allow him to recuperate, but grows angry when he learns that Gaira is attacking and killing humans. When Gaira attacks Tokyo, Sanda decides he is willing to kill his own brother rather than let innocent humans die.

Sanda grew from the flesh of Frankenstein, along with Gaira. He was captured by scientists and studied when he was small, but he escaped to the mountains. One year later, he had grown to 30 meters in height. He returned to save Gaira from the J.S.D.F., and he took him to the mountains. Gaira started to eat humans, which angered Sanda, due to his upbringing around people. Sanda attacked Gaira, but Gaira fled. Gaira attacked Tokyo, and Sanda fought him again. They fought in the sea, but they were both pulled into a volcano. 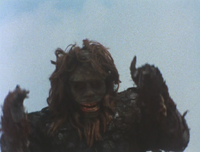 In Go! Godman, Sanda reused one, of the ultra Template:Kaiju Tyrant's roars.

↑ back to top ・ contents
Retrieved from "http://wikizilla.org/w/index.php?title=Sanda&oldid=32304"
Categories: