An ancient guardian of the Earth, Mothra defended the planet from the alien cyborg monster Gigan in ancient times. When Gigan's mummified remains were uncovered by the Earth Defense Force in 20XX, Mothra sent her Shobijin to warn the EDF about the evil nature of their discovery. Mothra finally left Infant Island to aid Godzilla against the Xiliens' forces, but the Controller of Planet X unleashed Gigan to defeat her once and for all. Gigan seemingly defeated Mothra, but she returned and intervened when Gigan and Monster X had Godzilla at their mercy. Mothra battled Gigan again, and successfully destroyed him once and for all, but seemingly at the cost of her own life.

This incarnation of Mothra looks identical to the Mothra imago from Godzilla: Tokyo S.O.S., due to being portrayed with the same prop. The only difference seems to be that its fur is slightly darker.

Like her previous incarnations, this Mothra is a benevolent guardian of Earth. Mothra uses her Shobijin to communicate with humanity, and warns them of the impending resurrection of her ancient enemy Gigan. Mothra later comes to Godzilla's rescue when he is being attacked by both Gigan and Monster X, and ultimately sacrifices her life to destroy Gigan.

An ancient guardian of Earth that lives on Infant Island, Mothra battled the evil cybernetic space monster known as Gigan thousands of years ago. Mothra defeated Gigan, and he was subsequently mummified and buried in Hokkaido. Mothra continued living alongside the Shobijin on Infant Island until the year 20XX, when Gigan's mummified corpse was uncovered by the Earth Defense Force. 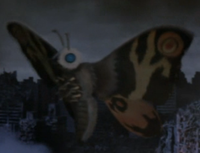 Thousands of years ago, Mothra defended the Earth from an alien monster known as Gigan, defeating him and entombing him off the coast of Hokkaido. In the year 20XX, the Earth Defense Force recovered Gigan's mummified remains, drawing the attention of Mothra and her Shobijin. The Shobijin appeared to several members of the EDF and warned them that Gigan was evil and could awaken, but promised that Mothra would appear to defend the Earth. When the alien force known as the Xiliens took control of Gigan and an army of monsters and used them to conquer the planet, Mothra flew to Tokyo to aid Godzilla against Gigan and Monster X. Mothra saved Godzilla from being double-teamed by the enemy monsters, then confronted Gigan once again. Gigan fired two razor discs at Mothra, but she used her reflective scales to avoid them. Gigan responded by blasting Mothra with his laser beam, causing her to erupt in flames. Believing himself victorious, Gigan turned around only for his head to be sliced off by his reflected razor discs. Mothra, still on fire, flew into the headless Gigan and exploded, apparently killing them both.

Mothra is capable of reaching flight speeds of Mach 3. She can also generate hurricane-force winds by beating her wings, which she used in an attempt to keep Gigan at bay.

Mothra deploys her scales and dodges Gigan's Bladed Slicers before being ignited by his Gigarium Cluster.

Mothra can deploy yellow poisonous scales from her wings, which interfere with enemy attacks. They cause Gigan's Bladed Slicers to malfunction and boomerang directly back at him, slicing his head off and ultimately allowing Mothra to destroy him. While effective in helping her avoid Gigan's Bladed Slicers, Mothra's scales were unable to protect her from his Gigarium Cluster.

Fire Mothra flies out of an explosion and destroys Gigan.

Mothra briefly enters a state dubbed Fire Mothra (ファイヤーモスラ,   Faiyā Mosura) when she is blasted by Gigan's Gigarium Cluster, which causes her to erupt into flames. While in this form, Mothra flies into the decapitated Gigan in a kamikaze attack that seemingly kills them both in a fiery explosion.

Gigan slices off part of Mothra's wing with his Bloody Chainsaws.

Mothra is extremely susceptible to Gigan's attacks, as he is easily able to slice off part of her wing with his Bloody Chainsaws. His Gigarium Cluster also bypasses her protective scales and causes her to erupt into flames, though she is able to kill him by ramming into him while on fire.

This is a list of references for Mothra/Final Wars. These citations are used to identify the reliable sources on which this article is based. These references appear inside articles in the form of superscript numbers, which look like this: [1]

↑ back to top ・ contents
Retrieved from "http://wikizilla.org/w/index.php?title=Mothra/Final_Wars&oldid=150347"
Categories: