The first incarnation of Mothra to appear in the Millennium series, the GMK Mothra is one of the three sacred Guardian Monsters and the God of the Sea. Slain in ancient times by Japanese warriors and laid to rest under Lake Ikeda, Mothra was awakened in the modern day by the prophet Hirotoshi Isayama, who hoped to awaken the Guardian Monsters so they could defeat Godzilla. After the defeat of Baragon, Mothra traveled to Yokohama to battle Godzilla, and was joined by the third Guardian Monster, Ghidorah. Mothra was killed in the ensuing battle, but her spirit flowed into Ghidorah and transformed him into King Ghidorah so he could continue on the battle against Godzilla.

The GMK Mothra's name is unique in that, rather than being spelled in katakana characters (モスラ), it is spelled in kanji (最珠羅). However, it is still pronounced as "Mosura". Among the three Guardian Monsters, Mothra is known as the God of the Sea (海の神,   Umi no Kami). 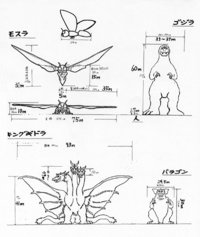 Concept art of all four monsters from GMK, showing their dimensions relative to each other.

Director Shusuke Kaneko decided that his Godzilla film would involve Godzilla battling against three Guardian Monsters, for which he chose Varan, Baragon, and Anguirus to fill the role of Godzilla's foes. Kaneko's story, Godzilla X Varan, Baragon and Anguirus: Giant Monsters All-Out Attack, was approved by producer Shogo Tomiyama and pitched to Toho, who requested that Kaneko work the more popular monsters Mothra and King Ghidorah into the film. Kaneko eventually complied with Toho's wishes after learning that many people were unfamiliar with the monsters he chose, and replaced Varan and Anguirus with Mothra and King Ghidorah while retaining Baragon. While in the past her imago stage was typically portrayed as larger than Godzilla, Kaneko's vision required three monsters each smaller and weaker than Godzilla. As such, Mothra was scaled down to possess a wingspan of only 75 meters and a body length of just 24 meters in her imago stage. Her larval stage was also scaled to be the shortest yet at 30 meters in length. The design of Mothra's larval stage, seen only very briefly in the film, was left mostly unchanged from past depictions, and was portrayed in the film with a refurbished Mothra Leo larva prop from Rebirth of Mothra. Mothra's imago stage however was considerably altered, becoming the most drastic change to her design up to that point. Her body was made slim and streamlined with her white fur greatly reduced. Her eyes were changed to purple instead of blue, and her wings incorporated the colors of purple, orange, and yellow. Mothra's body proportions became more anatomically accurate for an insect, resembling a bee or hornet more than a moth, with long legs and a curved stinger-tipped abdomen. Mothra's purple eyes and white feather-shaped antennae were designed with the intention of giving her a feminine appearance.[3] The prop for Mothra's imago stage was modeled by Fuyuki Shinada, who also modeled the suits for all three of the other monsters. Despite her greatly changed design, the advance poster for Godzilla, Mothra and King Ghidorah: Giant Monsters All-Out Attack portrayed both Mothra's larval and imago stages with their Heisei designs.

The GMK Mothra's larval form resembles the larval forms of previous incarnations, only with slightly darker skin and deeper and more pronounced eye sockets. This larva's mandibles are also slightly smaller, and its face is very wrinkly.

The GMK Mothra's imago stage is very different from previous incarnations, looking almost like a cross between a moth and a hornet. This Mothra has purple eyes instead of blue eyes, long slanted feathery antennae, and extremely long legs with sharp claws it can use to attach itself to Godzilla's head. The wings are very sharp and pointed, with purple, orange and yellow designs on them. This Mothra has a long and curved thorax, which it can aim to fire stingers.

This incarnation of Mothra is one of the Guardian Monsters, who are concerned with defending Japan from any threats. Mothra and the Guardian Monsters are not so much concerned with defending the people of Japan as they are the natural land, shown when Mothra kills a group of teenagers who disturb her shrine at Lake Ikeda. However, Mothra does appear to show some regard for humanity, as seen when she seemingly sacrifices herself to save several JSDF battleships from Godzilla's atomic breath.

This version of Mothra is one of the Guardian Monsters, ancient beasts that inhabited Japan in ancient times. Like the other guardians, Baragon and King Ghidorah, Mothra was slain by Japanese warriors in ancient times, and was laid to rest under Lake Ikeda. The warriors prayed for Mothra and the other monsters' souls, that they might one day return to defend Japan. Thousands of years later, the prophet Hirotoshi Isayama transferred the souls of Japan's honorable dead into Mothra, awakening her so that she and the other Guardian Monsters could defend Japan from Godzilla.

Mothra was a legendary beast from ancient Japan and was known as the God of the Sea. Ages ago, noble Japanese warriors slayed Mothra and laid her to rest under Lake Ikeda. The warriors prayed for Mothra's soul, in the hope that she and the other guardian monsters, Baragon and King Ghidorah, would rise again one day to defend Japan.

In 2002, a group of teenagers disturbed Mothra's shrine after robbing a convenience store near Lake Ikeda. Mothra awakened and pulled the teenagers underwater, wrapping their bodies in a cocoon of silk. Mothra then encased herself in a cocoon which sat on the lake's surface. When the prophet Hirotoshi Isayama called upon the guardian monsters to stop Godzilla, Mothra emerged from her cocoon and flew to Yokohama to battle him. Mothra perched atop the Yokohama Landmark Tower and flew at Godzilla, firing poisonous stingers at him and scratching his face with her claws. Godzilla fired his atomic breath at Mothra, but she avoided the blast, which struck and destroyed the Landmark Tower instead. Ghidorah arrived shortly afterward and joined forces with Mothra against Godzilla. Godzilla easily overpowered both monsters, knocking Ghidorah unconscious and sending Mothra flying into a railroad track after she deflected his atomic breath from striking Ghidorah. Godzilla turned his attention to the JSDF's battleships in Tokyo Bay, but Mothra flew behind him to take him by surprise. However, Godzilla turned his head at the last moment and fired his atomic breath at Mothra, vaporizing her. Mothra's life force flowed into Ghidorah's body, reviving him as the Thousand-Year-Old Dragon, King Ghidorah and giving him an advantage in the fight.

When King Ghidorah was ultimately killed by Godzilla, the spirit of all three guardian monsters flew into Godzilla, causing him to sink underwater and allowing the Satsuma to fire a D-03 Missile from within Godzilla's body, opening a gaping wound on his neck that ultimately caused Godzilla to destroy himself when he fired his atomic breath.

Mothra's larval form can spit silk from her mouth, which she uses to build her cocoon on Lake Ikeda. Mothra also uses this silk to cocoon the bodies of the young people she kills at the lake.

This incarnation of Mothra is known as the God of the Sea, and spends most of her time under Lake Ikeda in her larval form. Mothra is even able to construct a cocoon that floats on the surface of the lake. After metamorphosing into her imago stage, Mothra becomes airborne.

An ability unique to this incarnation of Mothra is the ability to launch a hail of poison stingers from her abdomen. These stingers were sufficient to cause Godzilla to fall over.

After she is destroyed by Godzilla's atomic breath, Mothra transfers her energy into the unconscious Ghidorah, reviving him as the more powerful Thousand-Year-Old Dragon, King Ghidorah. Once King Ghidorah is destroyed as well, the collective spirits of all three Guardian Monsters flow into Godzilla and cause him to sink underwater, allowing the Satsuma to fire a D-03 Missile from inside Godzilla and open a gaping wound on his neck.

The GMK Mothra is easily overpowered in combat by Godzilla, who can knock her out of the sky with either his tail or atomic breath. Mothra is eventually destroyed entirely when struck by Godzilla's atomic breath at point-blank range.

This incarnation of Mothra's roars are modified and edited versions of her original roar.

This is a list of references for Mothra/GMK. These citations are used to identify the reliable sources on which this article is based. These references appear inside articles in the form of superscript numbers, which look like this: [1]

↑ back to top ・ contents
Retrieved from "http://wikizilla.org/w/index.php?title=Mothra/GMK&oldid=160604"
Categories: