Kogenta was a main protagonist in the 1966 Daiei film Daimajin, who later appeared as a major character in Dark Horse Comics' 1992 Daimajin homage, Godzilla Color Special.

Kogenta lived as a vassal to Lord Hanabusa. One night, when the village was deserted for a ritual in the mountains, Hanabusa was betrayed by Kogenta's fellow vassal, Samanosuke. Kogenta then hurried to the Hanabusa children's room and took them out of the castle with the help of some other loyal vassals who vowed to meet again at that spot in ten years. Kogenta took the children to his aunt's house where they hid from Samanosuke's search party. After the party had left the house, Shinobu led the group high into Majin's Mountain, to sacred ground near an image of their god, Arakatsuma. There she gave them refuge in a carved cave that was rumored to have once been the home of their god.

For ten years Kogenta lived in the mountains with Tadafumi and Kozasa Hanabusa. On the tenth anniversary of their escape, just as he promised, Kogenta started down the mountain and into town. On the road in, he was recognized by a vassal who had helped to overthrow Hanabusa, and was arrested and taken in for questioning. Despite his torture with hot iron rods, Kogenta did not disclose the location of Tadafumi and Kozasa. As punishment, Kogenta was dangled by his ankles until Tadafumi came to rescue him. Shortly after he was freed, he and Tadafumi were arrested and put in a cell for execution the next day. Shortly after they were tied to boards for their execution by spearing, the Daimajin Arakatsuma attacked, and threw their poles to the ground. They were uninjured, and then attempted to stop the Daimajin's rampage on the village after it had killed Samanosuke. They were unsuccessful, but Kozasa was able to get Daimajin to return to his statue form before it crumbled and Arakatsuma's spirit flew elsewhere. 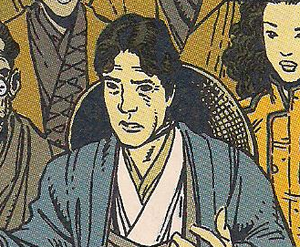 After quitting G-Force, Kogenta moved to the island of Kiryoku-Shima, which had abandoned modern technology after World War II, in order to research their medieval way of life. Some time into his tenure, on a particularly stormy day, the G-Force team landed on the island to inform the people that Godzilla was coming. They brought their message to the meeting hall and intended to commence preparations for evacuation, but the island's high priestess Ookii'Mune refused to comply and insisted that the island was protected. As Godzilla approached, Ookii'Mune lead the villagers to the sacred shrine of Gekido-jin, which Kogenta had heard of from accounts by soldiers in World War II, but had never seen, as outsiders were not allowed to see it. She explained that the statue was inhabited by an evil Oni who had tormented the island generations ago, and the spirit of a monk who had sacrificed himself to battle the Oni inside the statue for eternity to keep the statue dormant. Ookii'Mune had resolved to sacrifice herself to relieve the monk and allow the Oni to control Gekido-jin long enough to fight off Godzilla, but before she could complete her task, she was knocked unconscious by flying rocks kicked up by Godzilla. Kogenta then took up the task, having been moved by Ookii'Mune's faith in Gekido-jin, and while praying did not hear G-Force shouting for him to get out of the way. He and the statue of Gekido-jin were flattened by Godzilla, but Kogenta was successful and fought Godzilla off the island, where he took up the eternal battle with the Oni, and Gekido-jin reformed as a statue at the bottom of the ocean.

The Boy Who Cried Godzilla

46 months ago
Score 0
This man is my man.
Permalink
↑ back to top ・ contents
Retrieved from "http://wikizilla.org/w/index.php?title=Kogenta&oldid=152187"
Categories: