Mothra (モスラ,   Mosura) is a giant divine moth kaiju that appeared in the 1996 film, Rebirth of Mothra.

The last living member of an ancient species of giant guardian moths, Mothra lived out her days in peace with her priestesses the Elias on Infant Island. As the end of her life neared, Mothra summoned forth an egg so that her offspring could continue her legacy. She was called upon to fight again when the demonic three-headed space dragon known as Desghidorah was unearthed from his ancient tomb and began destroying the world's forests. Mothra's egg hatched prematurely and her larval son entered the battle to assist his mother. When the tide of battle turned against her and her son, Mothra carried the larva out to sea to safety. However, Mothra's strength had failed her and she could no longer remain airborne. Mothra fell into the water and struggled to stay afloat. The larva tried desperately to save his mother, but could only watch heartbroken as Mothra drowned and sank beneath the waves. Mothra's death would not be in vain, as the larva cocooned and metamorphosed into the powerful Mothra Leo, who avenged his mother by doing battle with Desghidorah once again.

The body of a new Mothra imago prop is constructed for Rebirth of Mothra.

Rebirth of Mothra came about in part through recycling some ideas from Kazuki Omori's Mothra vs. Bagan screenplay. The film retained the basic premise of an elderly adult Mothra doing battle with an ancient evil kaiju, receiving assistance from her newborn larva before perishing in battle. Initially, Toho planned to simply reuse the Mothra imago props from 1992's Godzilla vs. Mothra, but found that they were so badly damaged that it was necessary to create new props. Tomoki Kobayashi modeled the new Mothra props for Toho Video Art.[5][6] Two props were built, one for close-ups and one for action shots. Both props were less than one meter in length, as it was deemed easier to create scale models than a brand-new full size prop.[7]

This incarnation of Mothra closely resembles the imago form of the previous Mothra incarnation, to the point of looking almost identical upon first glance. However, there are some differences, such as the different pattern on her wings. This Mothra has a wider face, turquoise colored eyes, and longer and thicker legs. Her antennae are also longer than the previous Mothra's, and feature a tuft of fur at the top, making them more closely resemble the antennae of real moths.

This incarnation of Mothra retains the traditional benevolent personality of all previous Mothra incarnations. Mothra exists to defend the Earth from threats, with the help of the Elias and Fairy Mothra. Mothra ultimately sacrifices her own life to defend both her son and the rest of the planet from Desghidorah.

Mothra is one of the last living members of a species of giant moths that defended the Earth in ancient times, and has been living with the Elias and Fairy Mothra on Infant Island for many years. As she reached old age, Mothra summoned forth an egg to continue her legacy once she dies. 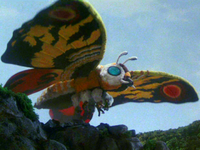 Mothra in Rebirth of Mothra

Millions of years ago, a space monster called Desghidorah arrived to destroy the Earth. This three-headed demonic dragon was forced to deal with resistance in the form of a species of highly advanced, enormous moths, which were known as Mothras. These moths were the protectors of the Elias, a race of tiny, human-like beings, who inhabited the planet. After the ensuing battle, Desghidorah was defeated and sealed within the Earth, although a great deal of life on the planet Earth was lost. Three Elias: Moll, Lora, and Belvera, were all who were left of their once prosperous civilization. Though Moll and Lora remained benevolent defenders of the Earth, Belvera became twisted and vengeful following her race's demise. These tiny fairies, along with one final Mothra, remained in solitude on Infant Island for countless millennia.

In order to preserve her legacy, Mothra summoned an enormous egg, however, she became physically exhausted from the ordeal. Shortly afterwards, a logging company in Hokkaido uncovered the tomb where the Mothras had sealed Desghidorah long ago. When the seal that had bound the creature was removed from the area, Moll and Lora fought Belvera for control of the artifact. Belvera prevailed and managed to release Desghidorah from its rocky tomb, planning to use it to destroy mankind. Mothra was summoned to stop Desghidorah, which was absorbing the life out of the forests. Mothra fought her hardest to stop Desghidorah, but was simply too old and frail to carry on the fight. Moll and Lora reluctantly prayed to the egg, causing it to prematurely hatch into a larva named Mothra Leo. Mothra Leo arrived to assist his mother, but Desghidorah grabbed Leo with his teeth and bit into him. Mothra rescued her son and destroyed a dam, causing Desghidorah to be buried in a flood of water. With her enemy distracted, Mothra carried Leo out over the sea, but her strength failed and she fell into the water. Mothra struggled to stay afloat, as Leo desperately tried to hold her up above the surface, but to no avail. Mothra sank underwater and drowned, leaving Leo to carry on her legacy and stop Desghidorah. Leo then swam to a remote island to transform into his imago stage and continue the battle. 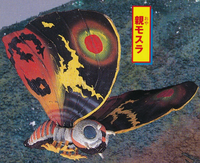 Mothra resided in a cave on Godzilla Island with her larval son, Child Mothra. In addition to her son, Mothra had an unhatched daughter named Baby Mothra, whose egg she hid inside of Gorath Volcano in order to keep it safe from Battra. She assisted the other kaiju residents of the island against the Xiliens' efforts to destroy it, and at one point helped to rescue Godzilla Junior. However, Mothra eventually grew old and remained inside her cave with her son. When a meteor crashed on the island and was revealed as the space monster Hedorah, Mothra flew into battle to try and defeat him, but was badly injured. Hedorah went after Child Mothra, but Mothra grabbed the Smog Monster and carried him into the crater of Gorath Volcano. Mothra's strength failed her, and she too fell into the volcano and was killed by the eruption. However, Hedorah survived and continued to menace the island. Child Mothra was devastated by his mother's death and initially refused to form a cocoon and mature into his imago stage, but was finally convinced to do so by a desperate plea from Torema. Child Mothra matured into Mothra Leo and joined forces with Godzilla, successfully defeating Hedorah. After this victory, the spirit of Parent Mothra appeared before her son and told him goodbye before disappearing.

Like the Heisei Mothra, this incarnation of Mothra can fire twin beams from her antennae known as Beam Pulser (ビームパルサー,   Bīmu Parusā).[5] These beams are remarkably accurate, and their accuracy is not affected regardless of how fast Mothra is flying.

Mothra creates a Pressure Field by releasing scales from her wings.

By scattering the scales released from her wings, Mothra can generate a Pressure Field (プレッシャーフィールド,   Puresshā Fīrudo).[5] This field generates lightning which will strike enemies.

Mothra hits Desghidorah at mach 80 with her Flash Dash ability.

Mothra can temporarily increase her flight speed to Mach 80 for three seconds in a technique called Flash Dash (フラッシュダッシュ,   Furasshu Dasshu).[5] However, this attack places a great physical burden on Mothra and cannot be used continuously.

Mothra can discharge energy from her body to escape from bite attacks, a technique known as Direct Impact (ダイレクト・インパクト,   Dairekuto Inpakuto).[5]

Mothra knocks the artifact out of Belvera's hand with her Milky Whip.

Mothra is able to launch a small whip from her antennae called the Milky Whip (ミルキーウィップ,   Mirukī Uippu).[5]

Mothra creates an explosion by using her stun trigger ability when touching Desghidorah.

Mothra emits a high voltage current from her claws that burns and causes explosions upon touching an object, an ability called the Stun Trigger (スタントリガー,   Sutan Torigā).[5]

While not as physically strong as her son, Mothra can lift a weight of up to 20,000 metric tons.[5]

Mothra with her egg

Mothra is able to reproduce asexually by summoning forth an egg.

This is a list of references for Mothra/Rebirth of Mothra. These citations are used to identify the reliable sources on which this article is based. These references appear inside articles in the form of superscript numbers, which look like this: [1]

11 months ago
Score 0
As a kid, I confused this Mothra and the hesie Mothra from the Godzilla movies together. I mean they look the same!
Permalink
You are ignoring the author of this comment
Show comment | Manage ignore list

12 months ago
Score 0
There're some differences between rhis Mothra and 1992 version is their face.
Permalink
You are ignoring the author of this comment
Show comment | Manage ignore list