Godzilla (ゴジラ,   Gojira) is a kaiju that appeared in the 2000 Godzilla film, Godzilla vs. Megaguirus.

Contrary to popular belief and despite being portrayed by the same suit, this Godzilla is not the same individual as the Godzilla that appeared in Godzilla 2000: Millennium, as the two films are set in separate continuities. Thus, it is the second incarnation of Godzilla introduced in the Millennium series of films and the sixth onscreen incarnation of the character overall. This Godzilla first menaced Japan in 1954, after being roused from his ancient slumber by nuclear testing and venting his rage on Tokyo. Godzilla reappeared at various points in history to feed on Japan's energy sources, prompting the formation of an elite anti-Godzilla unit of the JSDF dubbed the G-Graspers. By 2001, the G-Graspers had constructed an artificial black hole gun called the Dimension Tide, planning to trap Godzilla in another dimension for eternity. Instead, the test-firing of the weapon unleashed a swarm of prehistoric dragonflies called Meganula, and their queen Megaguirus, who attained massive size by absorbing Godzilla's energy. Godzilla fought and killed Megaguirus, and was seemingly defeated afterward when the Dimension Tide was fired at him from point-blank range. However, it would turn out that Godzilla had not been sealed in another dimension, but simply buried underground.

The name "Godzilla" is a transliteration of Gojira (ゴジラ), a combination of two Japanese words: gorira (ゴリラ), meaning gorilla, and kujira (鯨 or クジラ), meaning whale. At one planning stage of the original film, the concept of "Gojira" was described as "a cross between a gorilla and a whale." The two words "whale" and "gorilla" describe Godzilla's traditional characteristics. The word whale represents his aquatic lifestyle and his bulky size. The word gorilla represents his sheer strength and the strategic thinking he uses when fighting against other monsters.

Contrary to popular belief, the name "Godzilla" is not the idea of the American distributor. Before Toho sold the original film to US distributors, Toho's international division had originally marketed an English-subtitled print under the title of Godzilla, King of the Monsters!, which was shown briefly in Japanese-American theaters. Toho came up with "Godzilla" as an English transliteration of the name "Gojira"." The Japanese-to-English translation method of the Americans in the 1950's also proved that Godzilla was the correct English translation of Gojira.

The Godzilla in Godzilla vs. Megaguirus has a very similar personality to the Godzilla from Godzilla 2000: Millennium, and is portrayed as a destructive force of nature with little regard for humanity. Most of the destruction this Godzilla causes comes as a result of his search for nuclear reactors or other energy sources. Godzilla shows strategy and learning during his battle with Megaguirus, memorizing her attack patterns over the course of the battle and exploiting them in order to overcome her despite her superior mobility and speed.

The Godzilla in Godzilla vs. Megaguirus first appeared in 1954 and destroyed Tokyo before disappearing under the ocean. Godzilla was not seen again until 1966, when he appeared at Tokai and attacked the nuclear power plant there. Godzilla then returned thirty years later in 1996, when he fed on a plasma reactor in Osaka. 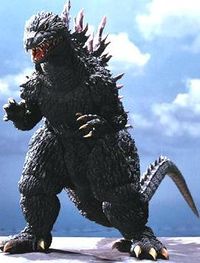 Godzilla in Godzilla vs. Megaguirus

In 1954, Godzilla raided Tokyo and reduced the city to a smoldering wasteland in one night. Afterward, Godzilla slipped back into Tokyo Bay and disappeared beneath the waves. The damage was so great that Japan's capital was moved to Osaka. Japan endured a decade of rebuilding, eventually embracing nuclear power and gradually putting Godzilla's attack behind them. But in 1966, Godzilla returned and attacked the Tokai Nuclear Power Plant, feeding on the nuclear reactor. The Japanese government concluded that nuclear power was what attracted Godzilla, so all of the country's nuclear plants were shut down. Japan struggled to find alternate energy sources, but nothing proved able to replace nuclear power. In the 1990's, a breakthrough was made in the form of plasma energy. This clean, non-nuclear power source appeared to be the future of Japanese energy. But in 1996, Godzilla was attracted to the plasma reactor in Osaka, deciding to feed on it in the absence of nuclear energy. A team of JSDF soldiers were deployed to stop Godzilla, but they were massacred. The lone survivor of the operation was Major Kiriko Tsujimori, who went on to become a founding member of the JSDF's elite anti-Godzilla unit, the G-Graspers. By 2001, plasma energy was banned in Japan, and the G-Graspers had developed the ultimate anti-Godzilla weapon, a miniature black hole gun called the Dimension Tide. The Dimension Tide was test-fired in the outskirts of Tokyo, where it completely absorbed an abandoned building. The G-Graspers were certain the Dimension Tide would do the same to Godzilla, and the weapon was mounted on a satellite while the G-Graspers searched for Godzilla. Godzilla was discovered in the waters off Japan, and the GX-813 Griffon was sent to lure him ashore at Kiganjima. The Dimension Tide was prepared and aimed at Godzilla, but suddenly a swarm of giant prehistoric dragonflies called Meganula flew overhead and attacked Godzilla, draining his energy with their tails. Godzilla killed most of the Meganula with his tail and atomic breath, and the Dimension Tide was fired at him. However, the weapon merely buried Godzilla under a pile of rubble, and he quickly got up. Godzilla waded out to sea and vanished.

Shortly afterward, Godzilla came ashore in Tokyo Bay, heading directly for the science institute. En route, he was attacked by Megaguirus, the Meganula queen which had been mutated by the energy her swarm drained from Godzilla. Megaguirus attacked Godzilla near the Tokyo Telecom Center, easily avoiding his attacks and landing several of her own due to her incredible speed. After managing to slice off Megaguirus' claw with his dorsal fins, Godzilla turned the tide of battle when he caught Megaguirus' tail and stuck it into the ground. Godzilla jumped into the air and body-slammed Megaguirus. Megaguirus flew at Godzilla, aiming her stinger at his head, but he caught it in his mouth and bit it off. Megaguirus reeled back in pain, as Godzilla fired his atomic breath directly at her, causing her to erupt in flames before crashing to the ground and exploding. His enemy defeated, Godzilla reached the science institute and uncovered a hidden plasma reactor. While Godzilla was distracted, the Dimension Tide was fired at him. However, the satellite fell out of the atmosphere and was approaching Tokyo. Tsujimori used the Griffon to allow the Dimension Tide to lock on Godzilla's location, then ejected as soon as the weapon fired. When the smoke cleared, Godzilla had disappeared without a trace. Godzilla appeared to be finally gone, and the nation of Japan rejoiced.

A few weeks later though, the G-Graspers began to detect a series of tremors underneath Tokyo, and contemplated the possibility that Godzilla was merely pushed underground by the Dimension Tide like before. These fears were confirmed when Godzilla emerged from underground in Tokyo, roaring menacingly.

Like other incarnations of Godzilla, this Godzilla possesses the character's signature atomic breath. This Godzilla's atomic breath is more or less identical to that of the Godzilla from the previous film. Godzilla's dorsal fins glow orange and begin giving off intense heat, then Godzilla unleashes a fiery orange beam from his mouth. The beam has incendiary properties, producing fiery explosions upon striking surfaces or other monsters. Godzilla's atomic breath was even capable of destroying a miniature black hole fired by the Dimension Tide on two occasions.

The Godzilla from Godzilla vs. Megaguirus displays a great degree of durability and resistance to injury. Godzilla easily withstands all of the JSDF's attempts to attack him with conventional weaponry, and endures numerous strikes and attacks from Megaguirus, including being impaled in the stomach by her stinger, eventually outlasting and defeating her. Godzilla also survived being attacked twice by the Dimension Tide, a satellite that fires a miniaturized black hole designed to trap Godzilla in another dimension. When the weapon is first fired at Godzilla on Kiganjima, he uses his atomic breath to destroy it before it can reach the island, producing an explosion that only buries him underground. When attacked by the Dimension Tide a second time in Tokyo, Godzilla seemingly destroys the black hole with his atomic breath once again as it strikes him, but vanishes afterwards, causing many to assume he was successfully trapped in another dimension. However, this assumption was incorrect, as Godzilla rose from underground sometime later. 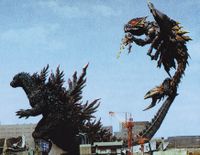 This incarnation of Godzilla is forced to rely a great deal on his physical strength and endurance during his battle with the much faster and more agile Megaguirus. This version of Godzilla displays the ability to use his tail as a weapon, first when battling a swarm of Meganula and later during his battle with Megaguirus. When Megaguirus tries to attack Godzilla from behind, he uses his prehensile tail to grab her stinger, then pins her stinger into the ground. Godzilla then jumps high into the air and body-slams Megaguirus. Godzilla also uses his dorsal fins as a weapon, managing to slice off one of Megaguirus' claws when she flies past him. Godzilla ultimately defeats Megaguirus by catching her stinger in his mouth when she tries to stab him with it, then bites it off. Megaguirus reels back in pain, allowing Godzilla to destroy her with a direct hit from his atomic breath.

Godzilla is forced to rely on strategy and learning to a degree during his battle with Megaguirus when he is unable to defeat her through sheer brute force alone. Godzilla gradually learns and memorizes Megaguirus' attack patterns, allowing him to exploit openings when they arise. This is ultimately what allows Godzilla to overcome the much faster and more agile Megaguirus.

This version of Godzilla displays very few weaknesses in Godzilla vs. Megaguirus. His biggest disadvantage in the film is his bulk and relatively slow movement compared to the extremely fast and agile Megaguirus, who is able to dominate their battle for a period of time by outmaneuvering and quickly striking Godzilla.

This is a list of references for Godzilla/Godzilla vs. Megaguirus. These citations are used to identify the reliable sources on which this article is based. These references appear inside articles in the form of superscript numbers, which look like this: [1]

↑ back to top ・ contents
Retrieved from "http://wikizilla.org/w/index.php?title=Godzilla/Godzilla_vs._Megaguirus&oldid=157753"
Categories: